Support IEATA’s efforts for building and sustaining our worldwide community

Build and sustain our worldwide community! Bring the arts into the world — for growth, healing, communication, and collaborative learning.

Skip to content
Press Enter / Return to begin your search.

As a group of individuals living with developmental disabilities to young school age students ranging in age of 10 to 13, we learned about the famous iconic Bridge at Giverny.  We brought to life the bridge scene which was shown at our annual Artist fundraiser, called The Artist in All, hosted by the modern wing of the Art Institute of Chicago in conjunction with our annual art fundraiser.

We discussed what Monet’s disability was, which was that he was going blind. Working in groups,we took turns in wearing eye goggles with Vaseline of various thickness to create the various levels of blindness Monet went through. We had student volunteers who paired up with our residents.  Each took a turn wearing the eye goggles, depending on their studio partner  to be their eyes. This brought the level of trust to each person through being vulnerable; sometimes not easily accepted. 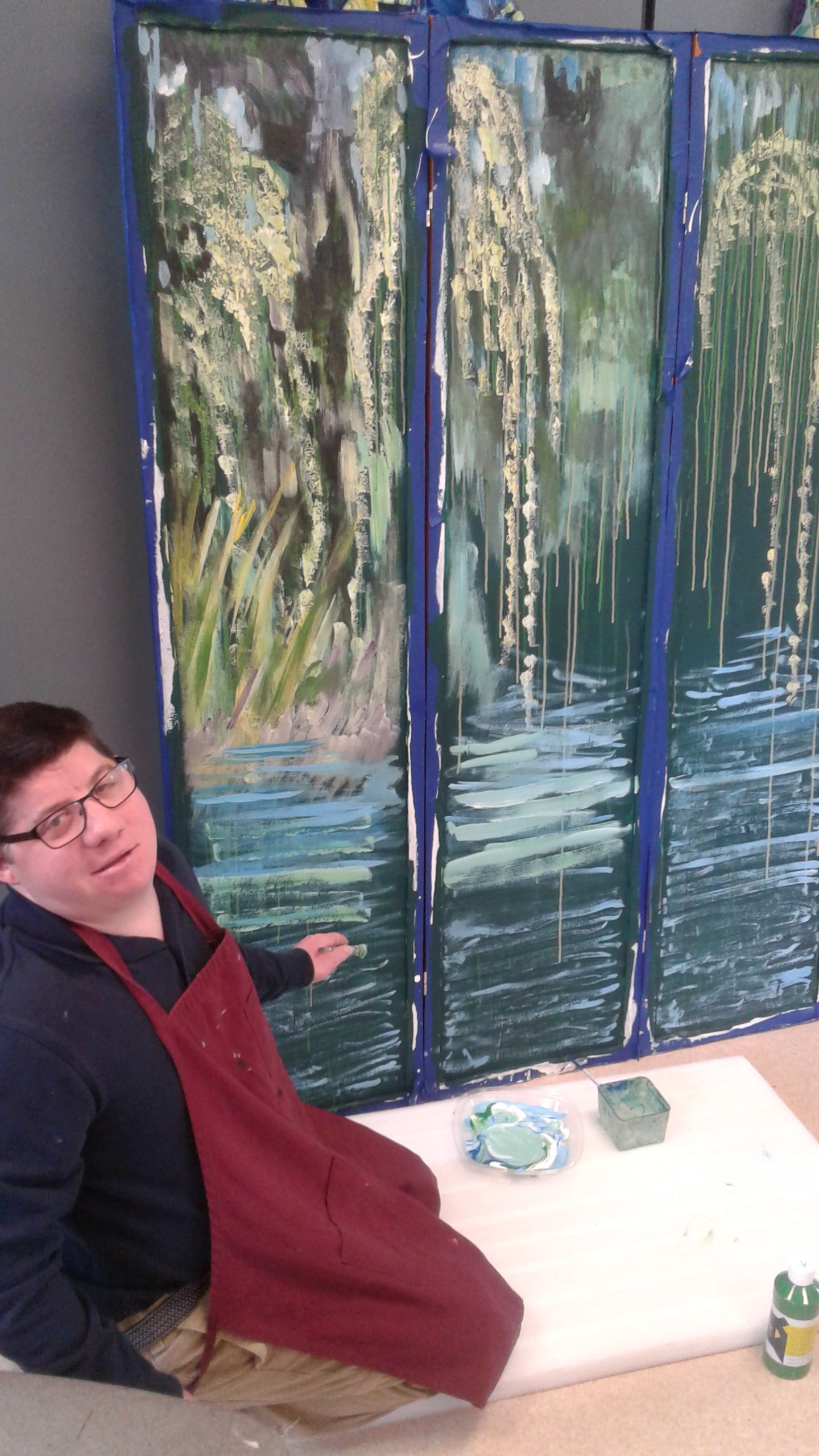 We constructed the bridge in sets of teammates using this basic elements of trust. The bridge construction also involved elements of team work such as having individuals who could read the instructions of assembly with individuals who needed more time to process the instructions and required assistance from their partner. Building the bridge became a physical  metaphor for individuals without disabilities to individuals who live with disabilities to become the builders of something concrete.  An object that connected two points but with many steps and stopping points over the bridge. It served the idea of how we all have our own bridge to walk over in this life. It brought together two cultures, one of non disabled students to individuals living with both Developmental and physical disabilities.

Creating this physical representation of the iconic painting enabled both the residents and school students to reconstruct the image as a theater group would create the set design to the stage props which would be needed. This activity enabled individual growth as we learned about the stages of life, such as birth, and the journey of life to the final steps of death. 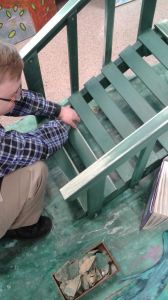 The residents artists made a connection to a famous artist who also lived with a disability.  The artists  expressed that perhaps Monet lost his physical sight but never his artistic vision. They learned how the bridge could be seen as a visual symbol of birth, life and the final step off of the bridge as death.The physical bridge served as a dimensional “Bridge drawing” art therapy directive. Each person took a turn walking over the bridge and being asked to stop at various points to reflect where they are on their own bridge of life. It was fun to see these younger people at the half way point over the bridge and being asked the question where do you see yourself at 40?. Many of the residents are over 40 so they shared in their own unique way how 40 felt to them. The most interesting step was the last step off of the bridge.  The step called death. The younger students had a challenge with this step and needed some help with their answers.  The residents who have had more life experience and are much older then these 12 yr. Olds spoke about death as a more comfortable experience then their younger friends.

The project connected artists from all walks of life as a real bridge would serve people making the crossing. The group learned that Monet maybe could not see the colors but he could feel them. This was the essence of this project. Two different populations coming together to work on a piece of art which bridged their similarities as well as their differences.  It culminated with the actual set up of the bridge on top of the canvas painted water to the impressionistic painted back drop all to create a still moment of time as Monet captured in his painting. 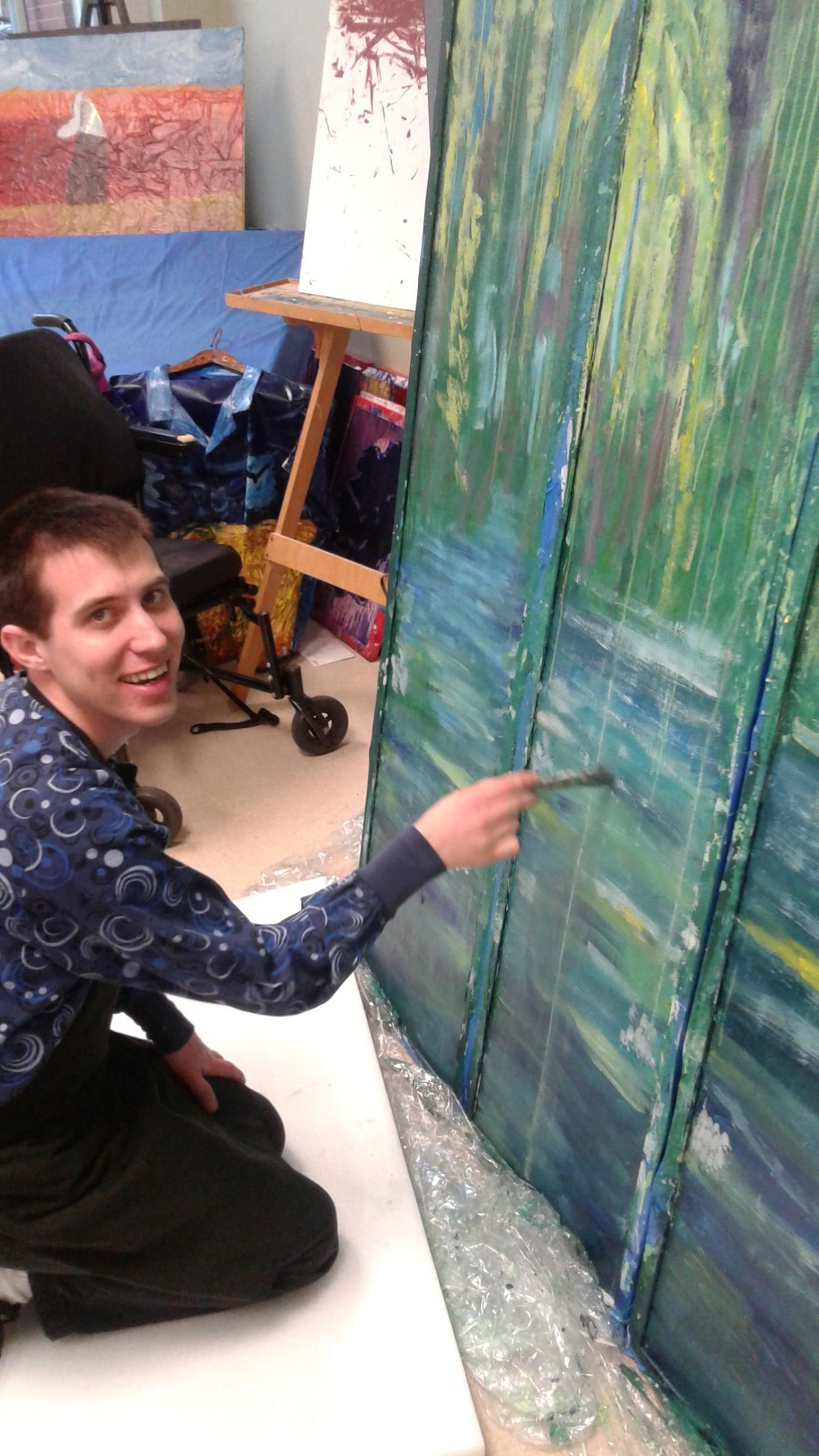